“CCE Care”: 30 photovoltaic kits for the community of La Higuera in Chile

Vienna / Santiago de Chile. February 14, 2022 – In November 2021, the photovoltaic specialist CCE opened its 87-megawatt peak solar power plant “La Huella” in the municipality of La Higuera north of Santiago de Chile. It is the first of four planned photovoltaic projects in Chile. However, the Austrian company does not only want to make a significant contribution to the fight against climate change. It also takes its social responsibility seriously and equipped 30 families in the region, who were previously not connected to the electricity grid, with photovoltaic kits free of charge. With the off-grid installation of the panels, the families are now self-sufficient and continuously supplied with energy. 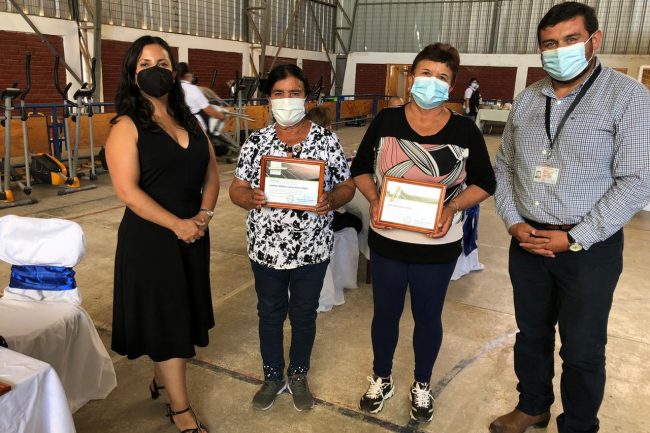 The Mayor of La Higuera, Borough, Yerko Galle-guillos (right) and Patrizia Navarrete R. (CCE Chile, pic-tured left) hand over photovoltaic kits to one of the fam-ilies in the neighbourhood of the solar power plant “La Huella” in the municipality of La Higuera.© CCE Chile

„Producing sustainable, clean energy is not only a forward-looking business for us,” explains René Hörwertner, Man-aging Director of CCE Chile and Business Development Latin America. “It is a personal concern of ours to invest in a technology that significantly promotes carbon neutrality in Chile, for ex-ample. From our point of view, all people should be able to enjoy “green” electricity, which is why we also support development at the private level where it is possible for us. So, we felt the need to make it accessible to people in the region as well.”

One of the farmers in the La Higuera region with his new PV kit.
© CCE Chile

For this purpose, CCE has launched the “CCE Care” initiative, under whose umbrella social, environmental or socially relevant projects will be identified and implemented – not only in Chile, but in all countries where CCE is active and maintains PV plants.

IN BRIEF
About CCE Care:
With “CCE Care”, CCE Holding has launched a corporate initiative to assume ad-ditional social responsibility, especially at its worldwide locations. With the tech-nical, but also financial possibilities of the group of companies, projects are devel-oped or existing ones are identified and supported that make renewable energy accessible to even more people and thus help to develop areas that were previ-ously undersupplied.

About CCE Holding:
CCE Holding was founded from a joint venture of the two photovoltaic specialists Clean Capital Energy from Austria and enernovum from Germany together with an institutional investor. The company, headquartered in Vienna, Austria, focuses on the development, realisation, financing and management of large-scale ground-mounted PV systems as well as commercial rooftop PV installations. With its solution-oriented approach, reflecting many years of experience in the entire value chain, the company aims to make an important contribution to the global energy transition. In addition to Austria, the company is currently active in Italy, France, the Netherlands, Germany, Romania and Chile.